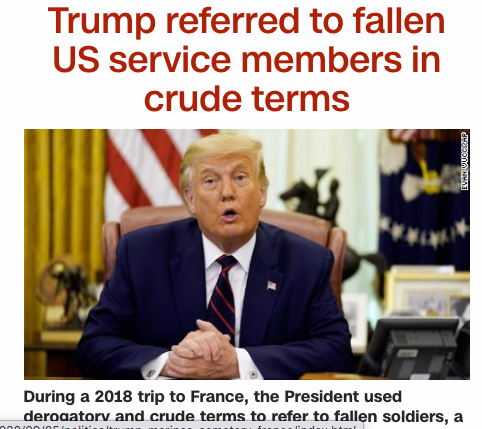 If you have not been paying attention, here is the scoop.

According to the atlantic, President Trump called service members who died ‘loosers’ and ‘suckers’. The atlantic story relied on a number of anonymous sources who would not get on the record. So at it stands, no one knows whether these sources are real or they are made up by the atlantic. The Trump administration has forcefully rebutted this story, more so than any in the past. The had more than 12 current and former officials who were part of the trip come out on the record to refute the story. They even presented email evidence to refute the story, referencing the fact that the secret service was involved with them not going to the cemetery in France on the first day of two visits. Their rebuttal seems credible as there are pictures showing the President in the rain the next day at yet another cemetery in France. So it is more plausible that security and weather on the first day made it impossible to put quick logistics for an American President to visit the cemetery via a motorcade. This is even more so, given the history surrounding the Russia collusion stories with anonymous sources that turned out to be wrong, it is important to keep this in mind.

Somehow, this story has become a major scandal and CNN did not want to miss the party. It reported in a matter of fact article that quote “Trump referred to fallen US service members in crude terms”. But then when you read their story, not once did they care that more than a dozen officials, including Trump critic John Bolton have refuted the atlantic story. To CNN it does not matter, as their goal is to make sure Trump does not get reelected. Buried in their story, they say in a quote that their own reporters at the time reported events that mirror Trump’s side of the story. Here is an exact quote from the CNN article:

CNN reporters in France during the President’s visit reported that local weather reports indicated there was a low ceiling and heavy rain in the area of the cemetery, and authorities at the time said there was not time to organize French security to cover a long motorcade route.

Yet, they believe their anonymous sources. Journalism is indeed dead in the era of Trump.

Do Covid-19 Guidelines apply to everyone? CNN says it depends!