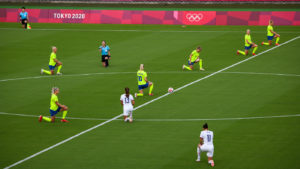 Across the board sports in the US are seeing reduced viewership ratings. Do we pin this down to the heavily politicized new wave of athletes we are seeing take to the arena? The NFL viewership was down 7% from the previous regular season, which makes this the lowest average audience since 2017. We see the same trend with the NBA, with last year’s finals game between the Lakers and the Miami Heat being the least-watched NBA finals in history. Lakers star LeBron James led the league to take the knee during the national anthem during that post-season. 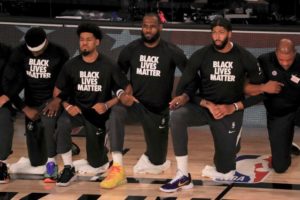 So what’s behind the swing away from sports spectatorship? The data emerging is that the public is not behind sports being used as a platform for political lobbying. A recent survey ( YouGov/Yahoo News poll) has exposed that 35 % of participants are watching less sport due to political and social messaging, and only 11% are watching more.

Sports are now highly politicized – for example – athletes seen kneeling during the national anthem or wanting to sit out certain games. The Captain of the US Women’s Soccer team, Megan Rapinoe, is known for being outspoken on all issues of injustice. Megan recently tweeted about the Olympics banning protests of any kind, clearly showing her disdain for this message. This level of anti-American antics causes even left leaning fans to question why players and other athletes like Miss Rapinoe decided to represent the USA, and does not give fans a reason to tune in.

All is not lost in the Olympics, as we saw with US wrestler Mensah-Stock, a black woman who is proud to represent the USA. Such joy and love of country attracts her fellow Americans to want to tune in and celebrate her win for team USA.

We are all taught to stay away from conversations of religion and politics. Perhaps sports games should follow this old adage too and become “politically neutral”, so viewership is not negatively affected.

View all posts
The NFL Takes a Stand on Coronavirus Vaccine Mandates for Players.